Once again, even though the Creative Writing Group has now closed, I thought you might be interested in the following which was first written in May, 2017.

“Birdsong”
I’m not a good sleeper; I either go to bed very, very late or at a reasonable time but can’t get to sleep and then wake at least twice in the night with typical old lady’s complaints. These are obviously all factors which are down to me, but every now and again outside (literally outside my bedroom window) a problem arises which is not of my own making but of nature itself. I first noticed it when I once went to bed very late, in fact after 2.30 am. As I opened my window, I heard chirruping from the trees about twenty feet away. “Whatever’s making that noise so early in the morning?” I asked myself. Not being very knowledgeable about birds, the next day I asked friends, who suggested it could be a nightingale but it was too early in the year for them. So, I Googled it and found in fact that it was a robin. Apparently, they are the last to go to bed and the first to wake up! (Rather like me, so I may have to change my name to Robin!).
But the best sounds are around four thirty am when the blackbirds start their conversations. The first is in the nearest tree to my house, about ten yards away in the school yard. His co-respondent is in a tree around fifty yards away, across the school playground. I just have to get out of bed and open the window a little wider to more clearly hear their conversation which I imagine goes something like this:
“Morning Peter, are you up yet? Are you up yet?”. “Of course I am, Paul, why wouldn’t I be?”
“Well I heard you had a late night last night. Chatting up Belinda, I believe?”. “Well, you’re only jealous. You’re only jealous. Just ‘cos you can’t get yourself a lady friend!”. “I’ll have you know I do very nicely, thank you.” “I’ll believe it when I hear it” responds Paul.
And so on it goes. Occasionally Peter will repeat his sentence twice, just for emphasis but Paul will then change the subject of the conversation and alter his tune accordingly.

In this age of technology, I can’t believe that scientists haven’t studied the blackbirds’ songs and been able to interpret what they are saying to one another. Their phrasing is so conversational, sometimes a little wistful, at other times questioning or indignant. It just cannot be random notes; it just has to be a proper conversation, which is often quite lengthy, not like the occasional squawk, chirrup or chirp of other birds, such as sparrows, seagulls and crows. Just this morning as I lay awake planning this piece of writing, I suddenly thought of the wood pigeon and, just as I thought of his name, he started his chant. Sporty Warren is the wood pigeon who sits on a corner floodlight, high above the school playing field behind my house, chanting “Come on United! Come on United!”.

The only sound I can well do without is the chatter of the magpies; they’re so loud, clattering and argumentative. I just have to shut my window when they begin, but usually they start their racket when I should have been getting up anyway.

I love the blackbirds’ song so much that I even bought myself a CD of birdsong which I play very loudly when I am just relaxing or reading a book, because the birds don’t usually sing all day, just at the early morning and evening shifts. But strangely in these awful times we are living in at the moment, I’ve noticed the blackbirds are singing nearly all of the day! So, you scientists, knuckle down to cracking the blackbirds’ songs so that we early risers can follow their conversations. 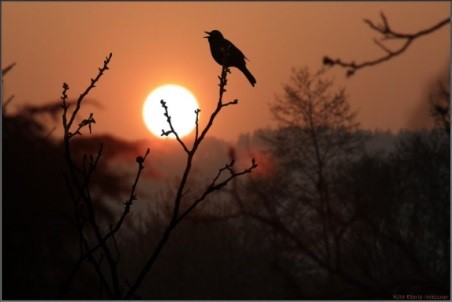