The name says it all!

As part of our continuing research into what makes things tick, the Grumpy Old Men, and several of the Not So Grumpies, visited Nottingham Council House
recently.

We were taken on a guided tour by Jackie Morris, former City Councillor and also twice Sheriff of Nottingham. The imposing building was completed in 1929, along with the former Processional Way. It was designed by local architect T C Howitt, who had originally suggested a more ‘commercial’ building. It replaced the old Corn Exchange on the same site, and the Goose Fair was moved from Old Market Square to its current home on the Forest when work commenced.

The view from the first floor balcony of the ballroom looks out over the large expanse of Old Market Square, and we were shown the long curved line in the paving which denotes the ancient boundary between the Saxon and Norman
parts of Nottingham. 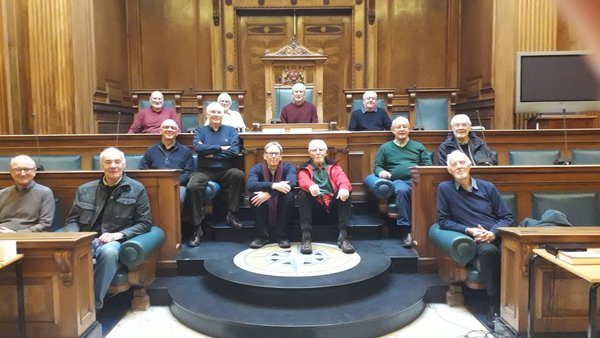 A slightly delayed start meant that the Grumpies managed to fit in a short
excursion beforehand to a well-known chain of pubs for coffee, causing some
confusion when we arrived en masse.

An interesting visit from which we all learned more about Nottingham. If you
would like to join the Grumpy Old Men, just use the email contact form below:-

We visited the Museum of Timekeeping at Upton for our latest monthly outing, and fittingly for the U3A, we were all early as usual. We had a very interesting guided tour from the manager of the museum, hearing about some of the rare and unusual clocks on display, as well as the history of the building. The oldest clock pre-dated ‘railway time’ and was adjustable to give longer or shorter hours, very useful if you were an unscrupulous employer!

The Museum closes for the winter period, apart from pre-booked tours, and we were shown an area where the displays are in the process of being updated, with less text explanations and more ‘hands-on’ exhibits. The building also houses the British Horological Institute, where courses are run for all aspects of clock and watch repairs.

We rounded off the morning with lunch at the Bridge Inn at Oxton, and no causes for grumpiness, remembering our founding Grumpy, John Ellis.

If you are a sufficiently Grumpy Old Man, and would like to join us, just use the email contact box below. We take it in turns to organize monthly visits and other activities – coming up in the next few months are visits to Nottingham Council House, an Amazon fulfillment centre near Doncaster and the Nottingham Tram control centre at Wilkinson Street. We usually retire for lunch after each activity at a nearby pub or similar.

A large group of Grumpy Old Men, and several Not-so-Grumpies, felt the long arm of the law recently, when they visited Nottingham Justice Centre. This is the Magistrates courts complex next to the Canal, which also includes Family courts and Tribunal cases.

Everyone managed to get through security, then we listened to a very interesting introduction from the two magistrates who hosted our visit. This included an outline of the very wide-ranging caseload of the courts, and the training needed to become a Justic of the Peace.

We then observed, in two groups, cases being heard in two courts where proceedings were in progress, one of them being in front of a District Judge, the other with Magistrates. We then had an opportunity to discuss what we had heard with the two magistrates, and to compare notes on how we would have dealt with the cases.

We all agreed that this had been an engrossing visit, and we followed it up with lunch just round the corner at the Vat & Fiddle pub.

Note for our Groups: the magistrates are willing to host further groups in the future.

The Group met for lunch at Squares in Nottingham and carried on to play two sessions of ten-pin bowling. The food was great, the bowling for most was ‘so-so.’ We may have been grumpy to start but by the end of the afternoon our demeanor was slightly improved. Nothing to do with the beer of course. Terry Hill is looking at an event for May and will communicate this a.s.a.p. The number in the group has been increased from nine to fourteen to hopefully have a regular turn out of ten grumpy old men.

This is for like-minded members who enjoy sport, dining, days out with a male theme. The Group will be a bit along the same line as the Pot Luck Group which has been going for almost 6 years, the only difference will be that the meeting dates will vary depending on the choice of activity.
The membership of the Group will also be limited due to the venues and activities.
If you are interested in going on a reserve list please complete the form below.
Coordinator…John