In June, the Mid-Length Walking Group enjoyed a pleasant walk at Holme Pierrepont National Water Sports Centre. Passing the White-Water Rapids, we followed the rowing course by the River Trent to the Water Skiing Centre where we had our elevenses.

After a stroll through Skylarks Nature Reserve, we came across the Skylarks Experimental Saxon Village. Unfortunately, it has been severely vandalised and the two volunteers who happened to be there gave us an interesting talk about its history and what they hope to eventually achieve. 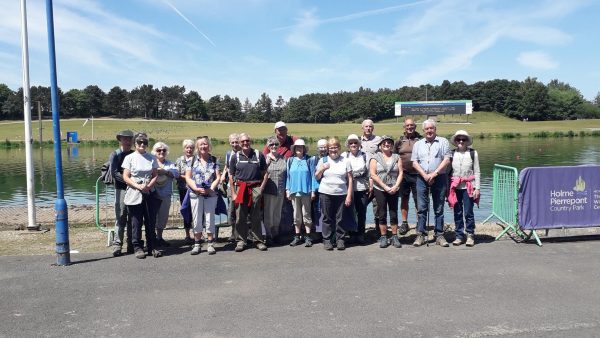 Dinner was eaten overlooking the Rowing Course then back via the Yacht Club to the car park. All in all, a lovely walk on a lovely day.

Our thanks go to Philip and Liz Attenborough.

Welbeck Estate and Belph
Twenty-one walkers assembled at the meeting point; several went off to avail themselves of the facilities, worryingly by 10 o’clock they had not returned; it was a long walk!

All present, introductions and formalities complete, we set off, heading north to pick up the Robin Hood Way east, (our route for the first three miles). The path skirts the Welbeck Abbey/House, which in the main is masked by greenery; we were given snippets of information about the eccentric 5th Duke of Portland and a brief history of the abbey/house. Open fields and oak/beech woodland are the main features of the area but what can go unnoticed, along a straight section, is a raised ridge running parallel to the path. A submerged gas lit tunnel, wide enough for two carriages to pass one another, begins at the house and emerges after 1.5 miles, above ground, through a set of doors at the South Lodge.

Continuing east along Drinking Pit Lane we arrived at the Busaco Ridge, a fine example of a ‘Holloway’ carved through Nottinghamshire sandstone. Returning to South Lodge for a coffee stop there were reminders of how Hucknall had benefitted from contributions made by the 6th Duke. 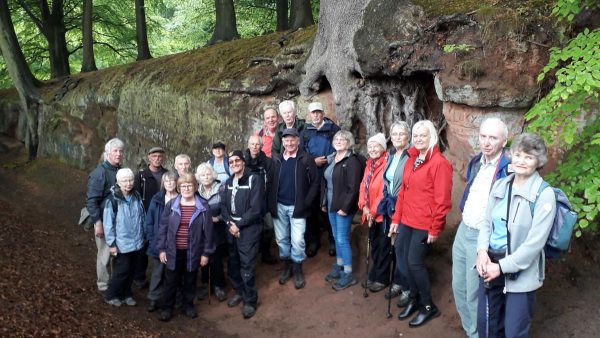 Refreshed, the walk continued NW along Broad Lane before turning west towards the hamlet of Belph. After a lunch stop, we continued south, returning to the start. A very pleasant walk. 6.8 miles for most, 7+ miles for some! Many retired to the Greendale Oak in Cuckney, others were tempted by the garden centre.

Our thanks go to Dave Kay and Ian Raynor for leading the walk.

A big thankyou to Steve Lawrence for taking the lead on the January walk. This was a lovely 7 mile walk around Ravenshead and Newstead Abbey, in glorious sunny weather.

The February walk will be led by John Tedstone and Gary and Tina Holmes. It will be a City of Nottingham walk, starting from the Forest Tram stop. More details will be sent to the group on email.

Our November walk started from Underwood and followed a route across open country to Selston, over paths reputed to have been walked by the famous author D.H.Lawrence.

26 of us started from the Hole in the Wall pub, the name believed to have originated from the Civil War, when canons were presumably fired at the building. At one time, it was possible to count over 30 coal mines in this area, and there are views across the Erewash valley, although a bit limited on the day of our walk!

On return, we set ourselves up in the pub for our traditional before-Christmas lunch, which concluded our shortened, although very welcome, walking season this year.

We will resume in January, all being well, with a local walk in the Ravenshead area.

Our October walk began at Codnor Park Reservoir and twenty walkers set off along Cromford Canal in the direction of the Butterley Tunnel. We left the canal to look at a group of terraced cottages that were built to accommodate the workers who in the mid-1800s were employed in the Butterley foundries. Arriving at the tunnel entrance we climbed up 30 steps and entered the wooded tranquil site of The Golden Valley Woodland Burial Ground.

Returning to the valley, we followed the line of the Midland Railway before turning south, to cross the Golden Valley Light Railway and through Jubilee Wood heading towards Codnor. In this section we came across The Brittain Colliery, had our first sight (for some) of the Jessop Monument and several stiles! Upon reaching Codnor we turned east and headed towards Codnor Castle.

On a ‘slippery’ up-hill section we passed the Ormonde Fields golf course. Emerging onto a road we saw Codnor Castle in front of us; this medieval fortress is a shadow of its former self. The castle’s ghost didn’t make an appearance, but the hilltop elevation afforded us views to the south in the distance of The Misk Hills.

We then made the descent to the Erewash Valley Nature Reserve before turning north to meet Cromford Canal again, which we followed through Codnor Park and back to the reservoir. After this 6.8 mile walk a well-deserved picnic lunch was taken, eagerly watched over by a wide variety of waterfowl!