Includes:
One full day and one half day excursion
Travel direct, NO stop at interchange
Entertainment most evenings including fancy dress competition
All rooms centrally heated with tea and coffee making facilities

Posted in Holidays | Comments Off on Festive Break – November 2022

Posted on September 7, 2019 by Webmaster

On Friday morning 49 excited members boarded the Skills coach for an historical tour of the north east taking in two cities with their various places of interest. 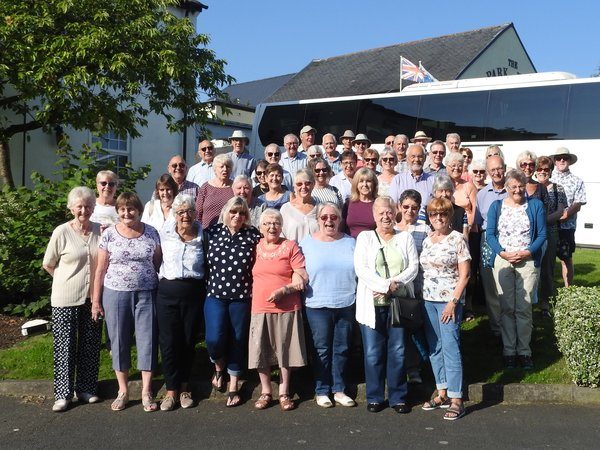 Our first stop was: –

Castle Howard a 300 year old historic house & garden near York. The weather was fine so we were able to enjoy the beautiful gardens, farm shop, gift shops, garden centre and of course the cafés. Then onwards to: –

Durham City – Bill Bryson (a well known author) called it ‘a perfect little city’ and Condé Nast’s Traveller magazine readers voted it the ‘Best city in the UK’. A captivating city with winding cobbled streets and a prominent peninsula crowned with the dramatic Durham Cathedral. We wandered around the City soaking up the almost carnival atmosphere and again sampling the delights of the City. A very warm but thoroughly enjoyable day.

Satuday evening was the main event and the reason for our visit:-

Kynren – An Epic Tale of England

We saw legends come to life in a thrilling tale told on an epic scale – 2,000 years in the making. The outdoor theatre spectacular set in the grounds of Auckland Castle took us on a spellbinding voyage through history as seen through the eyes of Arthur, the son of a mining family.

Boudicca’s courageous but doomed uprising against the Romans and the clash of Viking and Anglo Saxon leaders at the battle of Stamford Bridge was a spellbinding experience as was the excitement of daring jousting knights on horseback charging at full speed.

We witnessed the future King Arthur’s magical encounter with the Lady of the lake and watched Queen Elizabeth I’s royal barge as she invited Shakespeare to introduce some of his most famous characters. There was also a re-enactment of the outcome of England’s Civil War, Queen Victoria’s Diamond Jubilee and the battlefields of the continent during both World Wars. The show ended with a magnificent firework display.

On our final day and on our way home we stopped off at:-

York – As you would expect York was buzzing with tourists; it being a Bank Holiday. Again the weather played its part – very hot. The ice creams went down well. A visit to York is like stepping back into the middle ages, the overhanging timber-framed houses and traditional shopfronts of The Shambles. And you can’t miss York Minster, one of the largest cathedrals in Northern Europe.

Finally our thanks must go to Rose Ridley who organised the visit and made sure we were well looked after. Once again thanks Rose.

Posted in Holidays | Comments Off on Kynren, Bishop Auckland Visit

Posted in Holidays | Comments Off on December Holiday to Scarborough

Posted on September 6, 2015 by Webmaster

The Emerald Isle Ireland. 2016. KERRY @DINGLE
22/May/2016 staying at Killarney Heights hotel Killarney
Half board, all rooms with tea and coffee making, private facilities, TV, and lift to all rooms Included excursions : * full day Ring of Kerry , * full day Tralee and Dingle peninsular
7 days in total, with 2 overnight stops in Dublin en route. Local pick up and all transport and ferry costs.
I only have a small number on reservation so you will need to book quickly to secure a place
Price £419.00pp share twin or double room. Single supplement £131.00pp. Sorry could not get discount on this one!. £30.00 deposit secures your holiday. Cheques payable to. ALFA. Ltd.
Caroline Rhoades Email: carolinerhoades@ashfieldu3a.org.uk

Posted in Holidays | Comments Off on Holiday to Ireland