All Aboard the Nottingham Tram

The Grumpy Old Men were out and about investigating the Nottingham Tram system recently, when they visited the HQ for the Tram at Wilkinson Street.

Head of Operations, Trevor Stocker, and his colleague Connor Hardy outlined the history of trams in Nottingham, explaining that the first new tram when the current network opened in 2004 was numbered 201, as it follows on from the last original Nottingham tram, numbered 200. It is believed that some track still exists on the original routes, although buried under a lot of later road surfacing.

On the day of our visit, the tram named Lord Byron was in the depot for overhaul, and there were a number of very heavy duty wheelsets awaiting attention. The system has some very tight corners and the wheels need regular re-profiling.

We then visited the Control room, where the entire system is operated from. Trams do not operate overnight, but the room is always staffed as the overhead power remains permanently live.

Finally, we found a handy tram stabled outside to pose for our group photo. We were told that this was the first group visit post-lockdown. 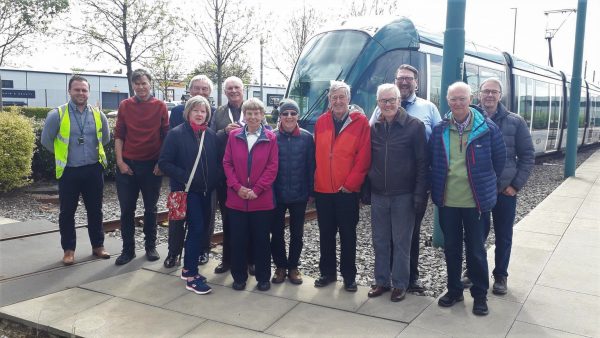 This entry was posted in Grumpy Old Men. Bookmark the permalink.