Scrabble takes place from 2pm – 4pm on the fourth Thursday of the month in the portakabin to the rear of the Catholic Church, Watnall Road, Hucknall. Newcomers are more than welcome. Scrabble sets are provided. Admission fee is a maximum of £2.
For further enquiries please contact the Co-ordinator on the form below.

Posted in Scrabble | Comments Off on New Members Welcome at Scrabble

Mah Jong takes place from 7pm – 9pm on the second Friday of the month in the portakabin to the rear of the Catholic Church, Watnall Road, Hucknall. Newcomers are more than welcome. No knowledge of how to play is necessary as this can be taught. Mah Jong sets are provided. Tea/coffee and biscuits included in the admission fee which is a maximum of £1.50 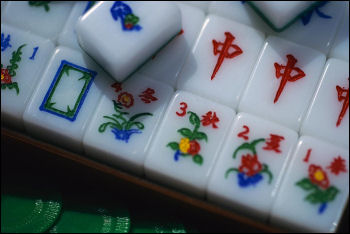 Over 200 members, including many from 2008, enjoyed a celebratory afternoon to mark the Tenth Anniversary of Hucknall and District U3A. They were welcomed by the current chairman and the afternoon began with an annotated slide show representing people and events since 2008.

This was followed by a video presentation by Michaela Moody, a U3A Trust Vice Chair, who drew comparisons between the developments at national level and those at Hucknall from 2008 to 2018. This was warmly applauded and appreciated by the audience and we thank Michaela for taking the time to do this.

Current Chairman David Rose then talked about Hucknall U3A today and a glimpse into the future. He was followed by John Ellis who was Chairman from 2010 to 2012. John is now our Honorary President and he entertained the audience with a ‘whistle stop’ tour from the early planning stage in 2008, creating a template, recruiting the membership and getting started. He concluded with the presentation of a bouquet to Dorrie Kirton. She is a popular founder member who had a prominent role in laying the foundations of our U3A.
Finally the impressive ‘Birthday Cake’ complete with some amazing decorations that represent our Interest Groups was surrounded by the past, present and our next Chairman-to-be, and ceremoniously cut. The impressive decorations were skilfully crafted by members Lynda Jackson and Vivian Ellis.

Afternoon tea was then taken to the soothing accompaniment of live music from member Paul Haigh and his group of 14 Baroque musicians. We received messages from several members to say how much they appreciated the event and the work of all the organisers exemplified by the direct quote below:

‘Profuse thanks to everyone who was involved in organising, helping and putting on a wonderful afternoon, which members enjoyed for the U3a 10th Anniversary celebrations. The decorated room was a picture, pristine white tablecloths, food copious, delicious, daffs on every table, entertainment, films…..A great time, thanks to everyone.’

‘Murder on the Nile’ – Bonington Theatre

We are looking forward to going to see The Bonington Players’ production of ‘Murder on the Nile’ at The Bonington Theatre in Arnold on Thursday, 26th April, 2018. It is also on Wednesday, Friday and Saturday evenings 25th, 27th and 28th April 2018 at 7.30 pm.
Tickets £8 each, available from the Theatre Box Office Tel:0115 9013640 or online at www.boningtontheatre.co.uk.