On July 16th we had our first non virtual meeting since February 2020. We met at Bestwood Country Park near the Winding Engine House which is the last remaining part of Bestwood Colliery – once one of the busiest coal mines in Nottinghamshire.

The winding engine lowered colliers, pit ponies and equipment into the mine shaft, and winched mined coal up to the surface. The tall brick building houses a huge winding engine. Originally it was powered by steam, the only vertical winding engine left in England still in its original location. Today the massive engine is moved by an electrical motor which we were able to see in action.

The engine dates back to 1876, the heyday of Victorian industrial engineering. For the explanatory tour we split into two groups and had the expertise of Bob Gow and his colleague Malcolm to show us round the impressive building and to provide a potted history of its history and development.

Following the tour we enjoyed refreshments on the lawn outside the Dynamo House which houses a community cafe run by ‘Friends of Bestwood Country Park’ which is open at the same time as the winding house both open to the public on Saturday mornings between 10am and 12noon all year. If you have never been a visit is recommended. 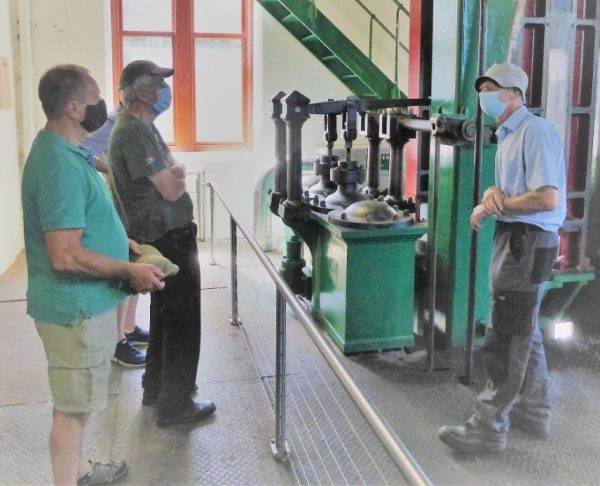 Volunteer Malcolm and part of the vertical steam engine

Thanks to Bob for arranging the visit and to Bob and Malcolm for being our knowledgeable guides.

This entry was posted in Science Group 2. Bookmark the permalink.