Once again, even though the Creative Writing Group has now closed, I thought you might be interested in the following which was first written in October, 2017.

The five elderly ladies sitting down for their bi-annual dinner glanced sidelong at their unexpected guest until the eldest, but not necessarily the bravest, cracked and asked timidly “Can we help you at all?”. The person (whether man or woman could not be identified as he/she was wearing a long coat with a hood pulled well over the eyes) sat down in the remaining sixth chair. It moved its head slowly side to side and turned to glance over its shoulder at the rest of the room. It was early evening at Luigi’s Restaurant, even the pre-theatre customers had not yet arrived and Luigi had placed the group in the furthest corner of the restaurant, away from the window tables and the central prominent tables. He had then taken their meal orders and disappeared into the kitchen at the other end of the restaurant where a furious argument seemed to be taking place, with much crashing down of pots and pans and raised Italian voices. The ladies looked at one another in fear and trepidation as the creature extended a gloved hand towards Agatha, handing her a rolled up piece of paper. Agatha took it and unrolled it, glancing at her companions, silently begging for their support, but they simply just sat there with confusion in their eyes. She looked down at the thick parchment-type paper and read the following words out loud to her friends:

“Just do as you are instructed and do not attempt to identify me. I shall be standing just inside the washroom door. When Luigi returns with your orders, just eat it without commenting on my presence. Then when you have all finished, come into the washroom one by one where I will be waiting. Do not attempt to alert Luigi or things will get difficult. You have been warned.”

Agatha looked at the others to see how they were reacting. Timid Mabel did not look up from examining her hands in her lap whilst Florrie looked worried and shifted closer to Beattie, who was the biggest and boldest of the group. Beattie opened her mouth to protest but the figure rose from its seat and swiftly went around the table, pressing a gloved hand in warning on Elsie’s shoulder. She gasped in fright and clutched her napkin to her mouth in fear.

The creature moved swiftly into the Washroom but kept the door slightly ajar so that they were still able to be aware of its presence. Just then Luigi came out of the kitchen, beaming at the ladies and bearing three plates of steaming food which he placed in front of them. He then rushed back into the kitchen and soon re-emerged with two more steaming plates. “Enjoy, signorinas, enjoy!”. He disappeared back into the kitchen, as still no new customers had arrived. The ladies looked at one another and then at the figure hidden in the washroom doorway. “Well” said Beattie “we may as well eat our meals whilst they are hot” and she tucked her napkin under her chin and began to eat. The others slowly followed her actions but at the same time kept glancing at the figure in the washroom doorway.

The food was so tasty and they tucked in with relish as they didn’t want to let it go cold. Then as they each finished their meal about the same time, they looked at one another in enquiry. Slowly Agatha picked up her knife and walked towards the washroom door. The creature opened it wider and she went inside. After a few minutes the others decided they couldn’t leave Agatha to her fate so they too picked up their knives and went into the washroom. There they found Agatha chatting amiably with a portly figure, bald headed and wearing rimless spectacles. There was the cloak on the floor. “Sorry about that, ladies” said the man “but it gets more and more difficult for food critics to get honest opinions from customers if the restaurant owners know a food critic in on the premises. Now what did you think about your meals?” 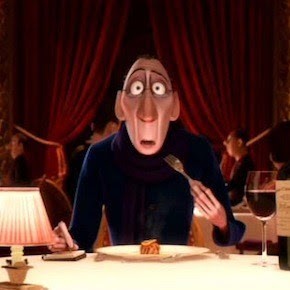